Chris Dunst teamed up with his young son to write and publish a book to both iTunes and to Amazon.

Iwrote my first book, entitled Pickle Man when I was in third grade using construction paper and crayons. Over the years my writing evolved with the technology—short stories on a Brother WP1400 word processor; news scripts for CBS News in Microsoft Word; math adventures for my fifth grade students in PowerPoint; and interactive tales using the Internet for university students.

My three-year-old son, José, on the other hand, has been telling stories since he’s been able to talk. He has a particular fascination with trains, fire trucks, and outer space, and almost always includes one or all of them in his stories.

This is the story of our latest book, The Fire Truck and the Moon. The road to Book Creator

One night, while reading books on the iPad, my then 2-year-old son asked to read something new. We browsed the Kindle Store and the iBooks Store. As we did, I began thinking that instead of searching for someone else’s book, we should create an ebook of our own. Having no idea what was involved, I figured that at minimum we needed stuff like words, pictures, and a means to publish.

The words and pictures would eventually come, but it was the “means to publish” that threw me for a loop. I searched the internet for ways to publish a children’s book to both the Amazon Kindle Store and the iBooks Store, but my searches always brought me to a digital fork in the road. The Kindle Store favored .mobi files and the iBooks Store supported the .epub format. Since I had an iPad, I opted to take the .epub route and come back to .mobi later.

I returned to the Googles and refined my search to iPad apps that would allow me to create an .epub formatted book with images, text, and multimedia. Several searches, self-publishing forums, and app demos later, I settled on Book Creator—a ridiculously easy and feature-rich book creation app.

Prior to our latest book, José and I had collaborated on five books: My First Train Book, My First Fire Truck Book, My First Space Book, and ABC Train. For each of those books the process was straightforward. I’d sketch out some ideas and he’d react to them. BTW, toddlers are brutally honest.

Our latest collaborative effort took a different approach. You see, José not only likes reading books (well, having books read to him), he enjoys telling stories of his own. On one particular evening, José began telling story after story. As he did, I grabbed my phone and captured him telling a fantastical and nonsensical adventure he called The Fire Truck and the Moon.

When he finished telling his story, José turned to me and asked if I would “make it into a book for the iPad.” Of course I said “yes” and that evening I began creating an animatic using his audio and some sketches. Given my poor art skills and the variety of characters in my son’s story I began looking at “How to draw” tutorials. For months I’d sketch a character on paper and run the drawing by José, who would give it a thumbs up or down.

Once he approved the drafts, I used the iPad apps Brushes and iDraw to bring them to life. After another round of approvals, I imported the PSDs into Photoshop’s desktop application to touch things up before exporting the final images as 2048×1536 PNGs. All that was left was to assemble the images in Book Creator, add text, and export the final book as an .epub.

Working with images in Book Creator

Prior to publishing the book I shared it with my son who kept tapping on characters wanting them to say something. He even went so far as to make his own sounds when his finger tapping proved unfruitful. This gave me an idea.

I imported the .mp3 of the original story from the iPhone’s voice recorder app into GarageBand where I clipped a few sounds. For sounds he wanted that weren’t in his original telling, I used the iPhone to record them.

I then imported the sound files into my iTunes library and added them as sound clips in Book Creator. 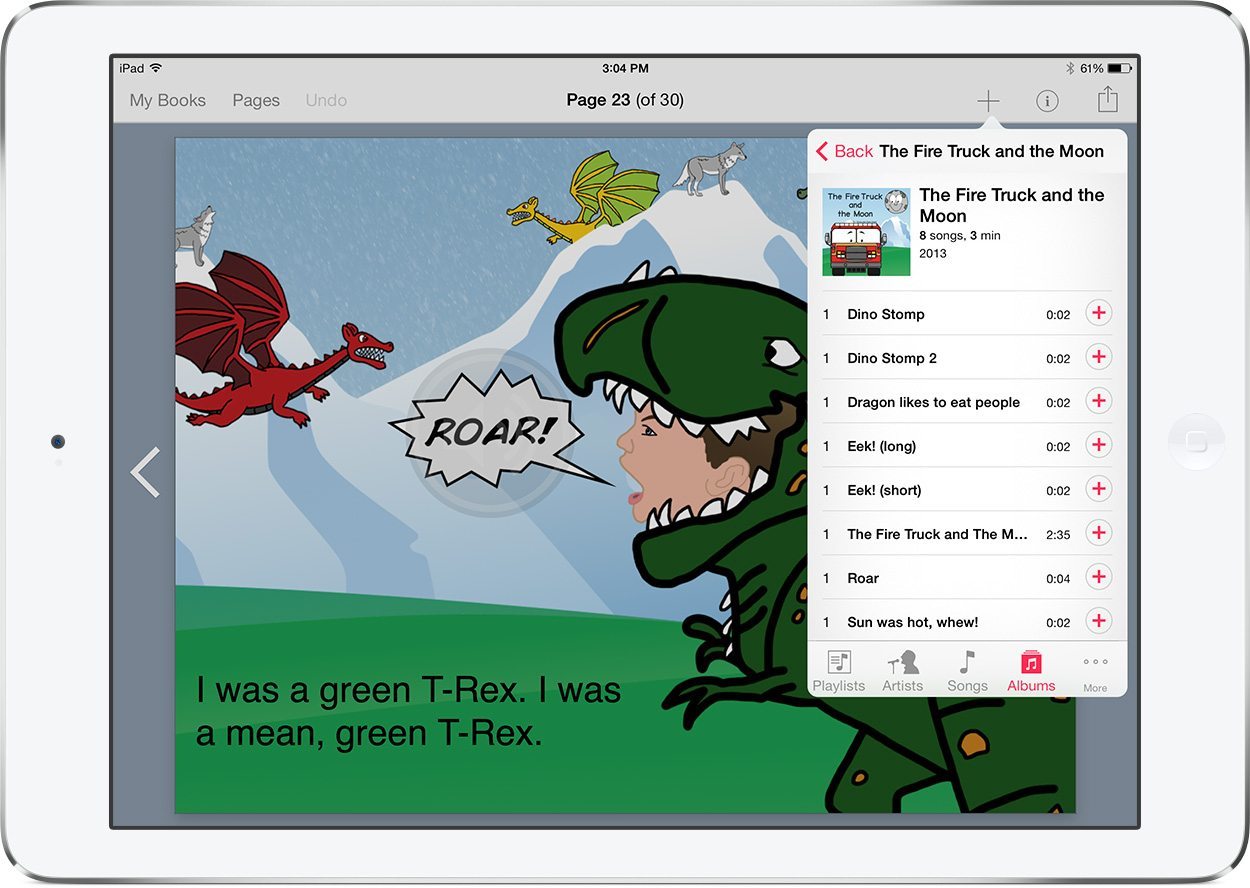 All that was left was to create a sample version of the book (basically a duplicate of the original with fewer pages), and upload both along with some metadata to iTunes Connect using iTunes Producer. Easy as pie!

How to publish to the iBooks Store

To the Amazon Kindle Store!

The process of preparing my book for publication in the Amazon Kindle Store was a lot more complex, and tasted nothing like pie. Even worse, given the restrictions of the format, there was no way to incorporate multimedia into the book. On the bright side, I was able to use the PSDs I created for my iBook as a baseline for how I wanted the book to appear on the Kindle.

To ready the book, I resized the PSD canvases to 1024 x 600, dropped the JPEGs into a fixed-width template I found online, did a bunch of copying/pasting and a little bit of coding in Dreamweaver, and generated the necessary .mobi file using Kindle Previewer.

I then imported the .mobi file into my Kindle Fire via Dropbox (the Kindle iPad app does not support sideloading) and previewed it before publishing it through the Kindle Direct Publishing website. I don’t know much about marketing, but I have a few social media accounts. To get the word out I blogged about the books, shared links to them on Facebook, Twitter, and Pinterest, and for two of the books, submitted my blog posts to the subreddit r/selfpublish. Cool story about the latter. After submitting The Fire Truck and the Moon’s blog post to Reddit someone wrote a pretty awesome review of the book.

I created my books to encourage my son’s interest in reading and storytelling, and Book Creator has made the process enjoyable and incredibly easy.

“Not a wordsmith nor am I a wildly talented artist. I’m just a dad who hopes his son enjoys childhood.”

13 Comments on “Is this the first ebook ever published on the iBooks Store by a 2-year-old?”