This is the remarkable story of just how far you can go with an iPad, a few apps and a spark of creativity.

Publishing to the iBooks Store To date we have used Book Creator to publish 8 of our books to the iBooks Store. The kids have written far more than this but these are the stories they have decided to share with the world.

So far they we’ve had 1,150 downloads in 19 different countries. This is an amazing achievement for a group of children who had struggled in the past. Now they are internationally published authors.

At the beginning of the year they set themselves a target of reaching 1,000 downloads by the end of the school year. I must admit I thought they were being a little hopeful and was worried about what would happen if they didn’t reach this target. But I needn’t have worried. The target was easily accomplished and I now see this magic number as being just the beginning of their journey.

Some of the stories are short, some are nearing novels but each one reflects the work put into it by the child. They have created their own illustrations either on paper or using the iPad and one has even written a sequel (with more to come).

The children get very excited hearing about where in the world their books have been downloaded. They also love the reviews left for them by people around the world and it has done wonders for their self esteem and confidence.

Search for ‘Cormac Cahill’ in the iBooks Store and you’ll see the list of books published. Any reviews left will be much appreciated!

Over the past year we’ve engaged in a very large project one where Book Creator would once again be central to its success.

One of the children is a huge fan of Minecraft PE and last year he borrowed the iPad and began building a variety of buildings and landscapes. Then he began taking screenshots of what he had built. I was still in the dark as to why he was doing this but his plan soon became very obvious. When the children were building and exploring in Minecraft they were essentially acting out a story. This child had the basis for a story in his mind but it was too big for him to contemplate writing it entirely in text. He is (as is his teacher) a big fan of comics but his story was also too big to draw the entire thing. So he used Minecraft to build his story and his screenshots were a journey through that story.

He next brought his screenshots into the Comic Life app where he created a 65 page comic about three bickering astronauts and their journey into space to defeat the evil Dr Cowton and his plan to turn every living thing in the universe into cows!

His comic was amazing and I wanted him to publish it. Enter Book Creator, where he imported his comic and created a book. Those of you who use Book Creator regularly may know that it makes publishing to the iBooks Store a simple process. For those of you that don’t know this, have a go. 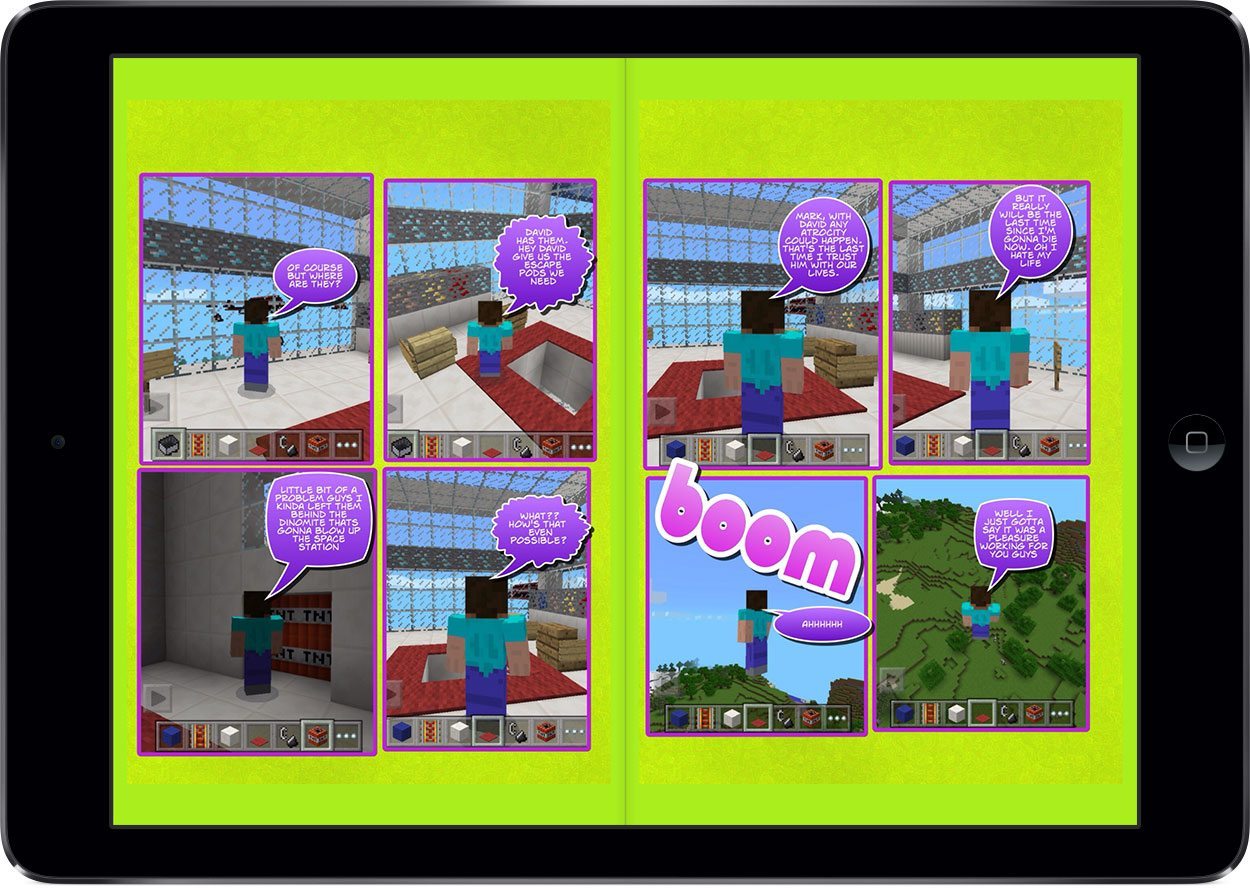 His comic has been downloaded 278 times in countries all over the world. Having a child’s work available all around the world is something that would have been unthinkable only a few short years ago. And now with a simple app a book can be made available in 51 countries with a few clicks.

Download ‘Power Out’ by Leon Duffy from the iBooks Store

Book gets a movie spin-off

But our journey didn’t end there. Our success with the published book gave us the idea of making an actual movie. We used his comic as the storyboard for our movie. We mirrored our iPad to a computer screen using an app called Reflector which allowed us to record what the children were doing on the iPad. The children went to play acting out scenes from our movie. All of the footage was put back into iMovie on the iPad and the children created a 5-minute long movie based on the comic complete with music, voice overs and a few special effects.

The movie was entered into a film festival for primary schools in Ireland called the Fís Film Festival. We were invited to an awards ceremony in November where the children not only won the award for Production Design but also walked away with the overall award: The Aileen McKeogh Award for Outstanding Achievement in Film Making presented to them by the Minister for Education.

An extraordinary achievement for a class of children who in the past had struggled to share their stories.

It’s the journey, not the destination

For us winning a national award was great but it was the process we undertook to create the movie that was the most beneficial aspect. The iPad was our tool of choice and almost all of the steps taken to create our final movie were undertaken on this device.

App Smashing is a term used to describe projects where more than one app is used. Many apps allow you to share work meaning you can add more to your projects by simply exporting work completed in one app to another so that more can be added.

It’s the idea that an app is not just simply an app but a tool to be used to create what you want. For this project we used the apps Minecraft, Comic Life, Book Creator, iMovie and for some fun an app called Action FX.

Book Creator is central to this process as it is always the host of choice. It can contain the comics we write, the movies we make and even the music we compose as well as our writing. It really is a one-stop shop.

All I can say is that at the beginning of the year we set out with the goal of publishing some stories to the iBooks Store using Book Creator. The year finished with 828 downloads, 17 countries and 2 national awards.

Not bad for an app that simply allows you to tell stories.

Having spent the past 7 years in a mainstream classroom, Cormac Cahill is currently teaching in the Autism Unit of Carrigaline Educate Together National School in Cork.

He is also an Apple Distinguished Educator, Book Creator Ambassador and a passionate advocate for the use of technology in schools.

4 Comments on “Book Creator, Minecraft, and the film festival award”